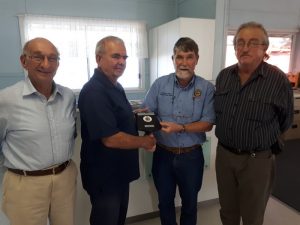 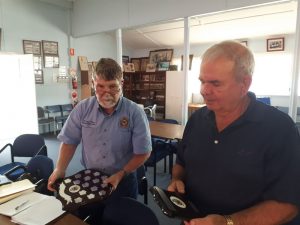 The District Executive decided in 2017 to introduce the District President’s Award. The award is a perpetual trophy that is to be awarded to a sub-branch each year that has engaged with their community and excelled in meeting the welfare and commemorative objectives of the League.

The award was to be presented at the Annual Dinner held in conjunction with the 2018 AGM in March this year but there was no representative of the winning sub-branch at the dinner and this could not happen. It was announced at the dinner that the Springsure Sub-Branch had won the award for 2017and it was decided that I would travel to the AGM of the Springsure Sub-Branch to make the presentation

This is the 1st time the award has been made and the judging related to the performance of the sub-branches during 2017.

Springsure, you are only a small sub-branch, but despite this, you networked with the local council, your community, and the PFH District to raise $130,000 to build a new cenotaph in their town. Through the major efforts of your Secretary, Nicole, most of the funds for the cenotaph were raised by applying for grants from a number of sources.

I had the opportunity to attend the opening of the new cenotaph which was held on Remembrance Day 2017and it seemed the whole town turned out. It was very evident that the community was right behind the project and the sub-branch had done a great job in engaging their community.

My congratulations go to the sub-branch members but in particular to:

The District Executive recognised Nicole’s contribution to this massive feat by awarding her a Silver Medallion in the 2018 Australia Day Awards.