The CQ CAPRAS hosted an ANZAC clash with the Wynnum Manly Seagulls at Brown Park Rockhampton on Saturday 28 April 2018.

Ex-servicemen and women were given free entry to the game.

The CAPRAS played in a special commemorative jersey and the jerseys were auctioned during the afternoon with all proceeds of the auction going to the RSL in Central Queensland.

The Ode was recited by the RSL Pioneer Fitzroy Highlands District President, Barry Vains, and the Last Post and Rouse was played by Graham Ivers from the Salvation Army.

The game was closely fought with the CAPRAS dominating in the first half and going to half time with a winning lead. Unfortunately, for the CAPRAS supporters, Wynnum came home strongly to win the game.

We thank the CQ CAPRAS for providing time before the game to allow the commemorative service to take place and donating the proceeds of the jersey auction to the RSL. 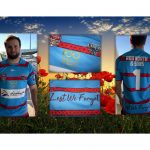 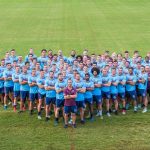 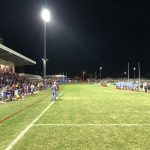