The Emerald Sub Branch commenced the day with the donation of its former flagpole which was made by a past member over 40 years ago. The flagpole has been sandblasted and painted and erected at its new home, the Pioneer Village in Emerald. The flagpole was donated to the Emerald & District Historical Association Inc and was dedicated by the Sub Branch President Noel Mallyon at a small ceremony at 9am at Pioneer Village on Remembrance day. The sand blasting, painting, cartage, digging of the footings, cementing of the footings , cement and crane usage were all donated. A small plaque placed on a rock describes the donation.

Later at the Remembrance Day ceremony at the Emerald  Cenotaph at 11am, saw the largest attendance known in recent times where after the  a Centenary of Armistice cake (attached) was cut and handed to attendees. The Emerald Rotary Club provided morning tea as a very kind gesture. Also part of the service including the planting of an established  Gallipoli pine tree in the vicinity of the cenotaph. 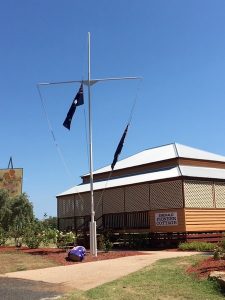 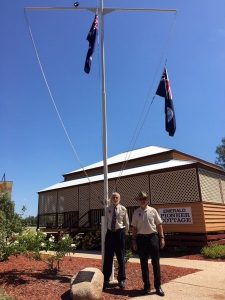 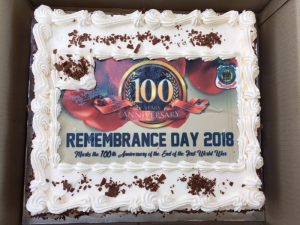